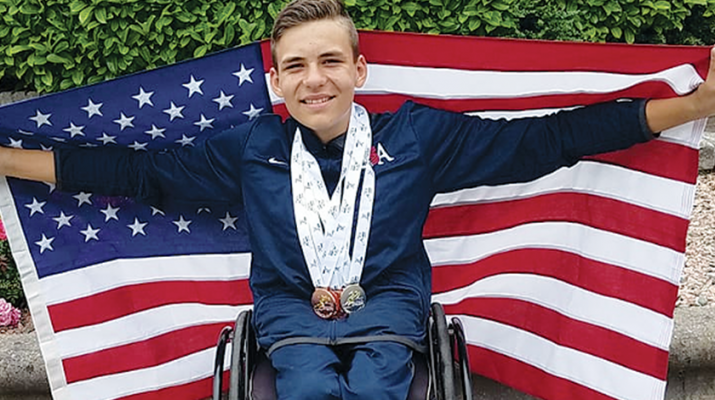 While many eyes were on elite runners during the Utica Boilermaker road race, the local crowd anxiously awaited 15-year-old wheelchair sensation Jason Robinson of Westmoreland.

If competing in a 9.3-mile race in a wheelchair isn’t daunting enough, Robinson literally had to travel thousands of miles to get here. He had just spent a week in Ireland at the International Wheelchair and Amputee Sports Federation World Junior Games, where he won five medals (four bronze and a silver) in track and field.

The IWAS Youth World Games are a biennial event for young athletes with a physical disability. This year’s event drew 165 athletes from 15 countries.

Robinson returned home less than 48 hours before the Boilermaker, obviously one of his favorite races. Despite his fatigue, he put on a good show and finished 13th overall in 38:26 against a field of older adults and many professionals.

“I took 17 minutes off (my personal best),” exclaimed Robinson.

“I must say I was speechless when I saw Jason approaching the finish line,” commented Marc DePerno, director of the Sitrin Stars program, which sponsors and organizes the wheelchair division. “While I expected a fast time, 38:26 was an incredible blistering pace.”

Robinson was diagnosed with spinal segmental dysgenesis at birth. “My brain doesn’t send signals to my legs,” he explained.

He recalled his parents, James and Erin, taking him and his siblings to the Boilermaker races as a young child and his thrill at seeing a wheelchair athlete for the first time.

“Throughout my life, I have been introduced into many adaptive sports,” Robinson said. “I was first introduced to wheelchair basketball and I enjoyed it, but found another sport in wheelchair racing, which I grew to love.”

He made his Boilermaker debut in 2013 at age 10, the youngest ever in the wheelchair division. He finished the 15K under the two-hour limit and qualified for a racing wheelchair courtesy of Sitrin Rehabilitation Center of New Hartford.

“It has been so enjoyable watching Jason’s growth over the past seven years,” DePerno added. “In the beginning, he participated in wheelchair basketball. At the age of 8, he was unable to reach the rim with the ball, but clearly had the drive to keep trying. Now he’s a force in everything that he does.”

Four years ago, Robinson learned about a wheelchair track and field team in New Jersey. The North Jersey Navigators have introduced him to a much larger world of wheelchair racing. He has competed in the 5th Avenue Mile (he won the junior division in 2017), the Junior Nationals, and now international competitions.

On his Facebook page, Robinson asked for $2,500 in donations for his overseas competition. “Since I am a junior wheelchair athlete competing for my country, this trip is self-funded,” he said.

He surpassed it, receiving $2,600 as of July 9. “The support means a lot to me,” he said. “Thank you again for helping me chase my goals and dreams!”

Robinson is entering his sophomore year at Westmoreland Central School. He has carved out his own niche in scholastic sports not only in Section 3, which covers the greater Syracuse-Utica region, but is paving the way for other student wheelchair athletes throughout New York State.

He competed for Westmoreland on the modified track team for two seasons and made it to the varsity level in his freshman year. Even though he runs solely against the clock, rather than against able-bodied runners, he continues to achieve remarkable times.

Before the 2017-18 school year started, Robinson said he and his mother met with state officials to discuss the rules for his competitions. Last September, he was given permission to compete in the Section 3 state qualifier.

Sports ‘N Spokes magazine reported on Robinson’s success and named him Junior Athlete of the Year.

Last spring, NYSPHSAA officially approved a wheelchair division in track and field that would carry over into the state championships. Only two other states in the U.S. include wheelchair athletes in high school sports.

Robinson, although racing alone, did compete in 10 meets for Westmoreland last season and earned official points for the team. He also stayed true to form in the state championships. He won the 3,200-meter event in 8:25.38 and the following day took the 1,600 in 4:00.98.

“I hope we’ll see more wheelchair athletes in the future,” he said. “I want parents to see that if they have a kid in a wheelchair that they’ll have a chance to play sports.”

Back-to-back-to-back titles were the norm at the 41st annual Boilermaker in several divisions of the 15-kilometer race, which was contested under ideal conditions recently.

Mary Wacera of Kenya won her fourth women’s open division title with a time of 50:01 minutes, tying her with another Kenyan, Catherine Ndereba, as the winningest female open runner in Boilermaker history.