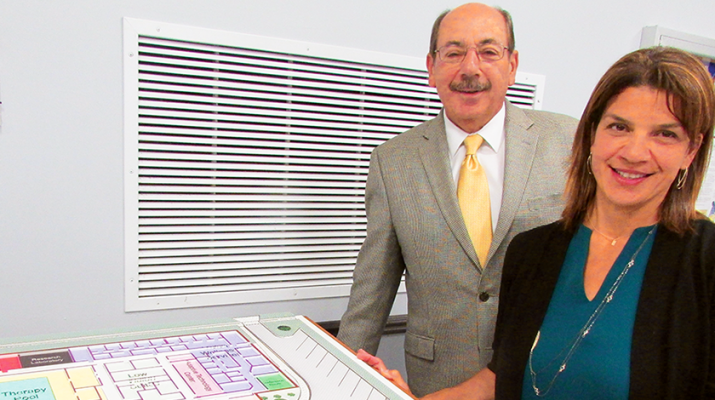 When the Central Association for the Blind and Visually Impaired began construction on its new $7 million vision rehabilitation center in east Utica a few months ago, Rudy D’Amico, CABVI president and CEO, was elated about the center’s future and its ability to better serve its consumers.

The good news just got better when CABVI announced recently that it has been awarded a $500,000 challenge grant from The Community Foundation of Herkimer & Oneida Counties.

“We made a decision long ago that a vision and wellness center was necessary for us, not only for Central New York, but across the country,” D’Amico said. “This is a wonderful opportunity to make a huge impact in the lives of people with vision loss.”

The half-million dollar award is the largest challenge grant in Community Foundation history and will be used to support CABVI’s “Focus on the Future” initiative.

The project has three major components: construction of its 23,000-square-foot vision and wellness center on Elizabeth Street, renovations to CABVI’s 72,000-square-foot headquarters, and the purchase and renovation of a building for CABVI Syracuse Industries in DeWitt.

CABVI provides support and services for adults and children who are legally blind and visually impaired. More importantly, the association provides jobs and job training for hundreds of adults in Central New York. CABVI serves eight counties, a geographic region roughly the size of New Jersey.

“CABVI continues to advance opportunities for individuals who are blind or visually impaired in innovative ways that also promote economic development and neighborhood revitalization,” said Alicia Dicks, president and CEO of The Community Foundation. She praised the project for helping to attract more residents to the city of Utica and enhance downtown development.

“I said to our board of trustees that this will be our biggest donation ever,” Dicks said. “Our donors are pushing us to do better with their dollars. We’ve donated close to three-quarters of a million dollars in the last 12 months and we’re thrilled to be a partner. We hope this grant challenges and incentivizes the community to step up.”

Federal, state, county and local agencies, the state’s economic development office and even the Lion’s Club have generated $3 million in funds to support the project.

The association has 270 employees, of whom 119 are blind or visually impaired. It has six operations in Utica that include administration, two warehouses, a call center, a mail processing plant for the New York State Department of Motor Vehicles, and a pre-vocational training center.

About 45 children are invited to Camp Abilities — summer and winter— each year. Visually impaired children receive training to help them succeed in school and eventually start on a career path to meaningful employment.

Adults from throughout the region with vision loss relocate to Utica seeking jobs, vocational and technology training, or receive advice on adapting to daily life and get assistance in finding housing.

Its other operations are low-vision clinics in four Upstate cities; a CABVI Syracuse Industries warehouse; a telecommunications unit at Stratton Veterans Administration Medical Clinic in Albany; and base supply centers for the U.S. military in Connecticut, Massachusetts, Maine, Rhode Island, Pennsylvania and New Jersey.

Among the products manufactured by CABVI workers for federal and state agencies are medical supplies, such as examination gloves for SUNY and the VA medical centers, New York City hospitals, as well as for the U.S. Postal Service and the Department of Homeland Security; opioid overdose kits; along with office supplies, textiles, neckerchiefs, flashlights and biodegradable kitchen products.

Faxton St. Luke’s Hospital (St. Luke’s campus) is one of the agency’s partners in the Mohawk Valley.

According to CABVI, an expansion of its services and facilities is needed to accommodate a growing number of adults with visual disabilities. The headquarters on Kent Street is located in an industrial building donated by General Electric some 40 years ago, but is in need of renovation.

Life expectancy is generally expected to increase, and the current baby boomer population is aging quickly, resulting in more severe medical conditions. Diabetes, for example, can lead to vision loss if not successfully treated.

“If (past) trends continue for the next decade, the number of individuals with vision loss who will need services provided by CABVI will exceed 2,700,” the association stated in a press release. “That’s an increase of nearly 70 percent.”

The new wellness center on Elizabeth Street, located next door to the Oneida County Health Department clinic, will have state-of-the-art features.

It will accommodate twice as many consumers requiring low-vision evaluations in three suites outfitted with advanced vision examination equipment.

It will also allow individuals to learn adapted technology such as screen magnification and programs that read documents aloud.

Also featured will be occupational and physical therapy and an aqua therapy pool. The center will provide meeting rooms for small groups or for individual discussion and counseling.