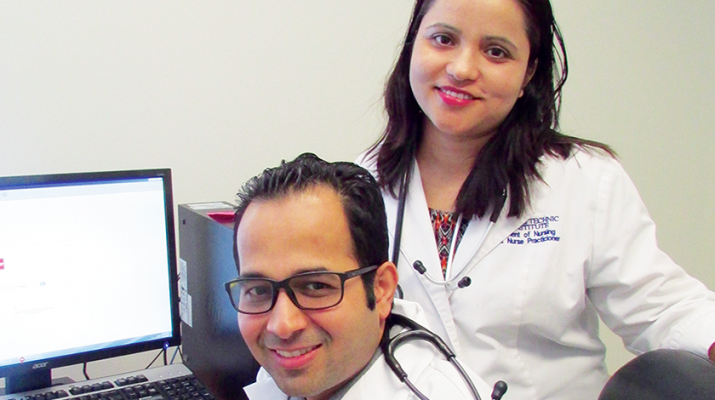 After enduring rigorous conditions as a refugee, NP in Mohawk Valley finds his niche in health care

Bikash Regmi is among thousands of immigrants who have come to the Mohawk Valley in recent decades to fulfill the dream of a new life.

Not only is he living his dream with a rewarding career, a wife and family, he is already giving back to his community, despite living in the United States for just 10 years.

Regmi, a native of Bhutan, is a nurse practitioner at Mohawk Valley Health System’s outpatient clinic in Barneveld, just north of Utica. He is also a member of the nursing program faculty at SUNY Polytechnic Institute.

Last month, he was honored by the Genesis Group of the Mohawk Valley at its annual Striving for Success banquet, honoring young professionals and entrepreneurs for their dedication and commitment to their profession and community.

Regmi, 33, was nominated for his volunteer work with OnPoint College in Utica, one of various educational facilities in Central New York that helped pave the road to his success.

Regmi’s early life was very difficult. When he was just 7 years old, he and his parents and two sisters were evicted from their homeland in Bhutan and exiled to refugee camps.

There, they spent 17 years living in a crowded hut in Nepal, an unhealthy environment, not always knowing where their next meal would come from. The indignities, the clinging to life, the sorrows of others, the disease and death he witnessed there did not discourage him or wear him down.

Instead, it molded his character in good fashion. It instilled in him a large measure of compassion and influenced him to choose a health care profession.

Bhutan is a tiny Asian country squeezed in between Pakistan and India and the Himalayan Mountains.

“It was (traditionally) a monarchy, a small kingdom,” he said. “We are Hindu and we had a different culture than the ruling king (a Buddhist). The Hindus lived in the north and west. It was a peaceful kingdom through the mid-1980s until the government (took over). People were deprived of an education; people were arrested without cause.”

One day, his father, a teacher, was inexplicably arrested and imprisoned. “My mother, my sisters and I didn’t know where he was,” said Regmi. “We didn’t know if he had been killed or arrested. Finally someone told us he was a prisoner.”

Nine months later, his father was released, but warned he could be locked up again. Within days, Regmi’s father decided to leave the country for good. Looking back, it was like jumping from the frying pan into the fire. Trading prison for an arduous experience in the refugee camp was an unwelcome choice.

“The life in the refugee camp was very miserable,” Regmi pointed out. There was a lack of basic sanitation, which led to disease — hepatitis A was most common — contamination, and very little drinking water at first.

“I have seen the death of many people, because of the lack of nutrition and poor sanitation. We stayed in the hut, which was made of bamboo and plastic. When there (was) strong wind, we needed to secure it, otherwise it will be blown (apart) by the winds. In the beginning, there were no toilets. The surrounding forest was contaminated with feces and urine. When the wind blew we could smell it and it was heartbreaking.”

Amazingly, the cruel environment that surrounded them did not crush Regmi and his family.

“I thought I could do something to help people,” he stated. “I told myself, one day I will go into medical care.”

He didn’t have to look far for inspiration. His father used his teaching position to benefit others. His father taught classes in a number of refugee camps. His modest income gave his family a slightly better standard of living than the other hopeless individuals in camp.

Other nations, including the U.S., Great Britain and Australia sent supplies to the refugee camps. Bhutan, meanwhile, refused to offer assistance or to take anyone back.

While in the camp, Regmi was able to take secondary and college courses. Although he was interested in nursing, those courses were not available, he said. He did obtain a bachelor’s degree in physics from a college in Nepal.

Seventeen long years later, in 2008, the family’s application for asylum came up. “I was very excited,” Regmi said. “We could have gone to Denmark, but we had learned about the U.S. and saw it as a land of opportunity.”

The refugees’ hopes were nearly dashed again considering the paperwork and approvals that took another year before they were approved.

In September 2009, InterFaith Works and The Center for New Americans adopted the Regmi family. The organizations provide resettlement and post-resettlement services for refugee families in Syracuse.

Approximately 1,500 refugees from Bhutan have been settled in the Syracuse area, plus another 300 in Utica, Regmi noted. “I met a lot of people who wanted to help; kind, helping people,” he said.

Regmi was 24 when he arrived in the area. He attended English language classes and volunteered with Catholic Charities in Syracuse and later was hired as an interpreter. While volunteering there, he met another Bhutanese refugee, Kumari, who was also interested in nursing and is now his wife.

Regmi eventually got a GED diploma and studied biology at Le Moyne College while still hopeful of pursuing his passion for nursing.

“It was very hard,” he said of studying a technical subject like biology while learning English at the same time. “I was lost for a few months.”