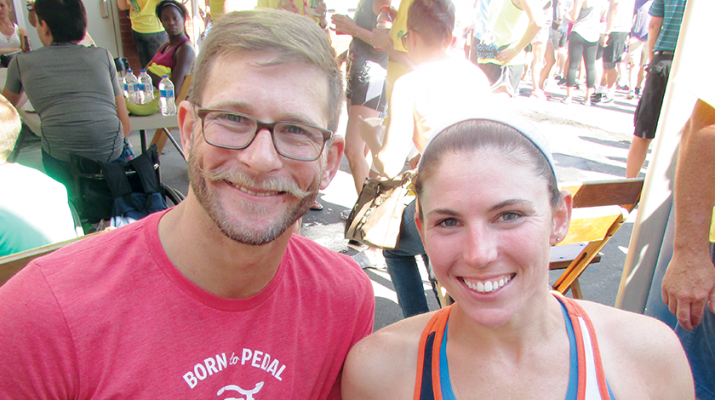 With $100,000 in prize money available for the first time to elite athletes, the 40th running of the Boilermaker Road Race in Utica lived up to its reputation.

The 15-kilometer race took off recently in east Utica and finished about two hours later on the west side of the city in front of F.X. Matt Brewing Co.

One of those elites is Amanda McCrory, who won the Boilermaker’s women’s wheelchair division title for the fifth consecutive year and sixth time overall. She also set a course record this time of 37 minutes, 40 seconds, smashing her own record of 39:11 that she set in 2011. There were no women competitors in the wheelchair division in 2013.

On the men’s side of the wheelchair races, defending champion 18-year-old Daniel Romanchuk of Urbana, Ill., had an impressive winning time of 33:05, topping his 2016 time of 35:09.

The prize money for the wheelchair division was $37,600, more than double last year’s amount, and drew a record crowd of 43 competitors.

McCrory, a resident of Savoy, Ill., is just 31 years old, but has a lot of years under her belt when it comes to professional wheelchair racing. She was second in this year’s Peachtree Run in Atlanta, Ga., which is held on July 4 and serves as a tune-up for many of the Boilermaker pros.

“It’s a lot easier when you know the course,” said McCrory. “The hills seem to come out of nowhere.”

She had an incentive to push her pace at the Boilermaker, and not only for the $4,000 winner’s prize. She had a plane to catch. As soon as the awards ceremony was completed, she dashed off to London, England, to compete in the World Para Athletics Championships, which were held from July 14-23.

McCrory is a member of the USA Paralympic Team, a division of the U.S. Olympic Committee. Fifty athletes and three guides were selected for the USA team.

The world championships will be the first major international track and field competition since the Paralympic Games Rio 2016 where Team USA won 42 medals. McCrory won a silver medal and a bronze last year.

McCrory’s dominance in the Boilermaker is no surprise considering her outstanding performances earlier this year.

In April, she placed second and set an American record in the women’s wheelchair division of the Boston Marathon with a time of 1:33:13. She mirrored her finish six days later at the London Marathon, taking second in 1:44:34 to win back-to-back medals en route to her fourth Abbott World Marathon Majors podium this year.

She also was among two athletes along with the women’s hockey team chosen for “Best of April” honors by Team USA.

McCrory considers herself a marathon specialist. She said she trains six days a week, a total of 10 sessions combining long-distance runs with speed training. The Boilermaker combines both of those elements.

McCrory, a native of Pennsylvania, has been in a wheelchair since she was five years old, a victim of a neurological disease called transverse myelitis that attacks the spinal cord.

“On Oct. 19, 1991, I woke up and discovered I could no longer walk,” she stated on her personal website. Her parents were naturally frightened as they took her to the hospital. After two weeks of multiple testing, she noted, the doctors informed her family, “No, we don’t think she’ll ever get better.”

McCrory admits she suffered bouts of depression as a youngster until her parents discovered a summer camp for children with disabilities that steered her in a positive direction. She graduated high school with honors, and accepted an athletics scholarship to the University of Illinois at Urbana-Champaign as a dual sport athlete. She played wheelchair basketball and was a member of the track and road racing team.

She graduated with a Bachelor of Science in psychology and is pursuing a master’s degree from the University of Illinois in library and information science, with a focus on archival work.

Meanwhile, her athletic background has allowed her to travel the world. She has won seven paralympic medals and 25 marathons.

This year’s Boilermaker wheelchair race drew its largest field ever, 43 athletes, a jump of 11 from 2016. It included four women.

Garic, 27, talked up the Boilermaker and his adopted hometown during trips to Peachtree, Maine and Seattle for races this spring.

No place to go but up

Last winter, after Jacob Moore lost his job, he found himself with extra time on his hands. Finally, in February, he contacted DePerno and inquired about joining the Sitrin Stars program.

He started off by playing wheelchair basketball, but DePerno also encouraged him to consider the Boilermaker. The Rome native knew his wheelchair racing challenge was going to be tough, but he also didn’t expect to finish last in the Boilermaker. It was a grueling experience.

A few months ago, Moore, 40, began training in Rome along the mostly-level Mohawk Trail roadway next to the Erie Canal and listened in earnest to advice from his fellow Stars.

It proved insufficient to conquer the Boilermaker. “I thought I was very much prepared, but the hills and curves messed up my times,” he said.

Starting about the three-mile mark, the hills pierce Valley View golf course and continue a steep climb up to the Utica Zoo. Such terrain derails most newcomers to the race, but it also separates the champions from the rest of the pack.

The first five kilometers took Moore an hour to complete. He finished the race in a disappointing 2 hours, 46 minutes, 29 seconds.

All first-time competitors in the wheelchair division, unless they’re professionals, compete in the 15K using a standard wheelchair.

Sitrin Rehab offers a challenge to the racers every year — those who finish in 2 hours and 15 minutes will earn a lightweight, three-wheeled racing chair.

Moore was even more disappointed that he didn’t qualify for the new wheelchair. However, a few days after the race, he learned that a local donor stepped in and decided to purchase one for him.