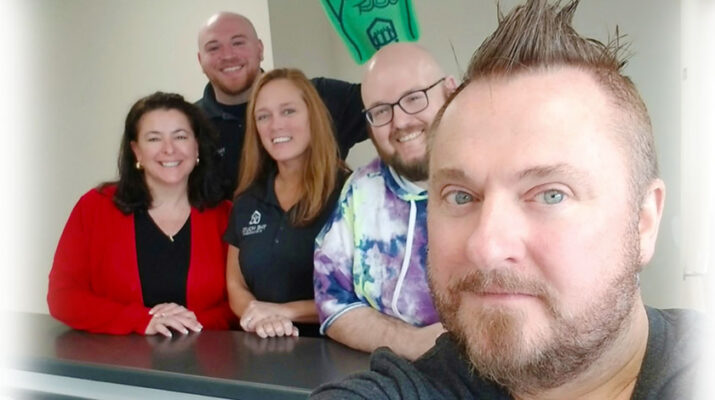 The House of the Good Shepherd and MVHS Foundation are two Utica-based nonprofit organizations that rely on their funds to help the local families, children, and medical staff who are struggling mentally and financially.

Both the House and MVHS Foundation host as many fundraisers and other money-raising events as they can during the year to not only keep their company afloat, but also continue helping those in need.

“A successful fundraising organization has a blend of personal outreach, face-to-face meetings, and events to support their fundraising efforts,” said John Forbes, MVHS Foundation’s vice president of philanthropy. “We do not want to put everything in just an event, but events can support your fundraising efforts tremendously. We do have events every year that both raise money and engage prospects so that they might be interested in giving us money down the road.”

But in 2020, the house and MVHS Foundation had to cancel a majority of their live outdoor events due to the coronavirus outbreak.

The annual golf tournament and the Wine All You Want Exclusive Wine Event and Live Auction were two of the house’s fundraisers that they had to cancel last year. The organization took a financial hit due to the cancellation of these events. Although even in the midst of a pandemic and economic downturn, members of the House continued on fulfilling the organization’s mission of providing residential treatment and community-based services to the children and families who struggled mentally and financially during the months of quarantine.

“We were affected by revenue funding streams at times,” Sean Farrell, the House of the Good Shepherd’s senior manager of marketing and communications, said. “The house incurred significant costs for cleaning and safety supplies. The families we serve certainly struggled financially. Therefore, we spent more to help them. We provided additional support to families struggling with food insecurity, maintaining housing, and ensuring treatment continuity.”

The MVHS Foundation had two fundraising goals set pre-pandemic.  The organization first stuck with its original mission, which, according to Forbes, was to raise as much money and give the funds to frontline medical workers at St. Elizabeth and St. Luke’s Campus (two MVHS-owned hospitals), so that they can use that money to purchase high-tech medical equipment and other necessities required to help their patients.

They also wanted to raise a separate amount of money for their capital campaign. The main purpose for the foundation’s campaign was to help MVHS with the construction of its new downtown hospital.

The MVHS Foundation was on the same financial boat as the House of the Good Shepherd last year. It too lost money after canceling its 2020 golf tournament, the Children’s Miracle Network drawing and Lights of Love ceremony. Although COVID-19 did not impact the group’s capital campaign, as the money amount for that kept growing.

“The flip side to it though was that we also are raising money for our campaign (to build a new hospital) and that has continued to grow,” Forbes said. “But from an event base, that loss of money that you counted on to go to the frontline workers, that was missed.”

Without the help of fundraisers, the House of Good Shepherd instead relied on social media and put together TV and radio commercials to get its name out there.

“Our social media presence, community emails and TV-radio ads played a significant role in sharing our mission and asking to support the House,” Farrell said.

Forbes said that the foundation did not resort to advertising and instead relied on videoconference meetings to stay in touch with its donors.

It was still possible for nonprofit organizations to host fundraisers during the pandemic, thanks to virtual communication. Instead of having annual events at a local park or building, in front of a group of people, members of the House of the Good Shepherd and the MVHS Foundation host virtual events on the Internet.

The House of the Good Shepherd hosted its first-ever virtual auction last September. For two weeks, local residents turned on their computers, went to the House’s virtual auction website (Changingchildrenslives.com/Auction) and out-bid other participants for vacations, dinners, home goods and other prizes.

Farrell said that the House raised more than $60,000 from this virtual auction. The auction was a part of the House’s annual Together We Are Essential campaign, aimed toward giving the children and families served by the House of the Good Shepherd a fighting chance towards a promising future, according to the organization’s website Hgs-utica.com. Farrell also said that despite the lack of live outdoor events in 2020, the organization’s campaign still raised more than $176,000 last fall.

The MVHS Foundation changed its Stomp Out Cancer telethon from a live to virtual event last year. Despite the change, Forbes said the foundation still received many donations from people and a large sum of money.

The MVHS Foundation also received help from the Mohawk Valley community itself, as many of the valley’s residents made kind and generous donations towards the foundation’s COVID-19 relief fund.

“Where we lost money, we also gained a little bit in another area and that is this incredibly generous community,” Forbes said. “They stepped up and made donations toward COVID relief.  So, we had a separate fund that we never had for COVID relief that was going to go directly to our frontline workers and this community redirected their giving.”

Even with the ease of COVID-19 restrictions this year, the House of the Good Shepherd will not host any live outdoor events and will stick to the virtual route.

“While it is unfortunate that we will not have any in-person events,” Farrell said, “the community’s health and safety is a responsibility we take very seriously.”

The MVHS Foundation’s Stomp Out Cancer telethon might stay virtual this year, but the organization does plan on bringing back its live outdoor events in the second half of 2021.

“We are doing a blend of both,” Forbes said. “We are trying to go back to our live events. We’re just saving them for the second half of this year. We are also conducting some virtual events as well. Our Stomp Out Cancer event worked so well last year virtually, that we might do that again this year.”