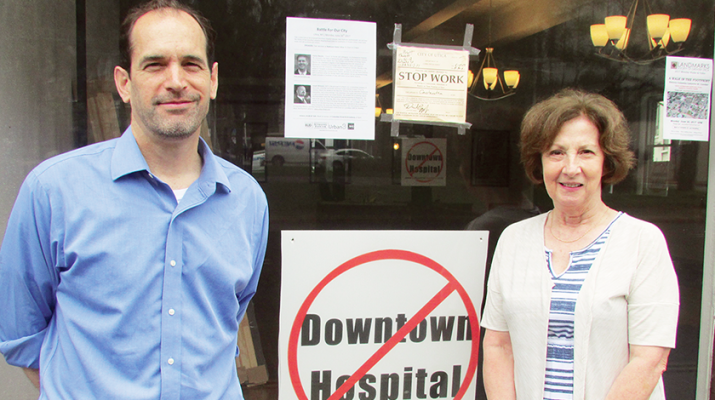 Planning, design phases under way; opponents continue to be vocal

The president-CEO of the Mohawk Valley Health System is checking off milestones and sounding more optimistic about the possibility of seeing a new hospital in downtown Utica rise before the end of this decade.

On a day when the Greater Utica Chamber of Commerce officially announced its support for the project, Perra couldn’t help but smile as he thanked the Mohawk Valley’s business and civic leaders for continuing to have faith in his vision.

“The resolution was certainly good news,” Perra said. “A lot of people are coming out and endorsing us now that we have the $300 million grant, but it’s been a 2-1/2 year journey.”

In addition, MVHS and the project team have started the first phase of the design process to build the new regional health care campus.

“We still have many more steps in the process including the environmental impact study for the proposed area,” Perra said.

When Gov. Andrew Cuomo announced passage of the fiscal year 2018 state budget extender, which funds all government operations through May 31, it included a $300 million grant from the Department of Health to MVHS to create an integrated health care delivery system in Oneida County.

In the coming months, MVHS and the project team will be working on the design of the new health care complex as well as finalizing their certificate of need application to the NYSDOH. MVHS expects to submit its application by November.

MVHS has hired an urban planning company, NBBJ, whose responsibilities include meeting with workgroups from the various departments within the health care system, as well as a forming a committee that will gather and consider community input during the design and construction phases.

Jonathan Wilch, principal at NBBJ, said his company would be meeting with MVHS employees and medical staff who will be working in the new facility. “This helps to ensure it functions in a way that allows them to provide the best care possible to their patients,” he said.

NBBJ representatives will also meet with community members to get their input into how the new hospital can best be integrated into the downtown Utica revitalization plan, he added.

Most of the officials who have supported the project from its start two years ago attended a recent press conference at the chamber offices in the Landmarc Building downtown: Utica Mayor Robert Palmieri, Oneida County Executive Anthony Picente, Assemblyman Anthony Brindisi (D-Utica), chamber executive director Meghan Fraser McGrogan and Patrick Becher, chairman of the chamber’s board of directors, who explained the rationale for the chamber’s decision.

The new facility would also integrate services at one site from specialty outpatient services to emergency and acute care services, and possibly doctor’s offices.

MVHS estimates the integrated health campus will cost $480 million for a 750,000-square-foot facility with 400 beds. In addition to the state grant, the remaining $180 million will come from MVHS capital, bonds and fundraising.

Additional benefits, the statement noted, include the recruitment of medical providers to a state-of-the-art venue, as well as expanded economic benefits by having 3,500 MVHS employees and staff working and possibly living in downtown Utica.

Palmieri said the new medical campus would be another piece of the puzzle that fits into his long-term plan for a revitalized downtown. The 2018 state budget also includes funds to renovate the Utica Memorial Auditorium, which sits on the edge of the downtown parcel sought by MVHS. Palmieri and Oneida County Executive Anthony Picente are eyeing the development of new apartments, a possible brew museum and a casino nearby.

Another milestone cited by Perra was hiring a project manager — The Paige Group — that recommended an architectural firm and a construction manager for the planning, design and construction of the hospital project. He said he understands the public still has a lot of questions about the project and MVHS will continue to be transparent and available for discussions with community groups.

On the morning of the recent press conference, three members of a group opposed to a downtown hospital marched with signs in the parking lot of the Landmarc Building.

MVHS’s new hospital will cover approximately 34 acres downtown between Oriskany Boulevard and Court Street. Much of that property is currently occupied. Some of those business owners are among the opponents of the plan.

Perra said MVHS has begun reaching out to property owners downtown and will begin appraising the properties. MVHS officials said once it finalizes its master contract with the DOH before the end of the year, it plans to make offers to buy those properties.

The chamber of commerce’s press release included a note saying, “Our member businesses located within the new facility’s footprint will receive fair market value for their properties.”

Joe Cerini, who owns a historic building called Citation Services, isn’t reassured. “I wouldn’t take a million (dollars),” he said while holding a “No Downtown Hospital” sign. “I’ve put in too much sweat equity and I don’t want to move.”

For 17 years, he has invested personal funds and muscle into renovating an 18,000-square-foot building that he said was riddled with rodents and a haven for drug addicts until he purchased it.

Brett Truett, owner of SoftNoze USA in Frankfort, joined Cerini in the protest. Truett is the organizer of a Facebook page #NoHospitalDowntown that has more than 1,200 supporters, including seven downtown business owners.

“If you want to attract people to downtown neighborhoods, you don’t do it by (losing) other downtown businesses,” he commented.

Truett said his biggest objection to the downtown hospital plan is to see politicians rather than physicians orchestrating it.

“We have all these politicians saying they have the money, but we’re not hearing about any support from the medical community,” he said.

He and Cerini also said MVHS will have trouble recruiting physicians to the area since the region — and New York state as a whole —is projected to lose population.

“If they can afford it, people will still go to out-of-town specialists” because they want to be treated by physicians who have greater experience with a more diverse patient load, Cerini said.