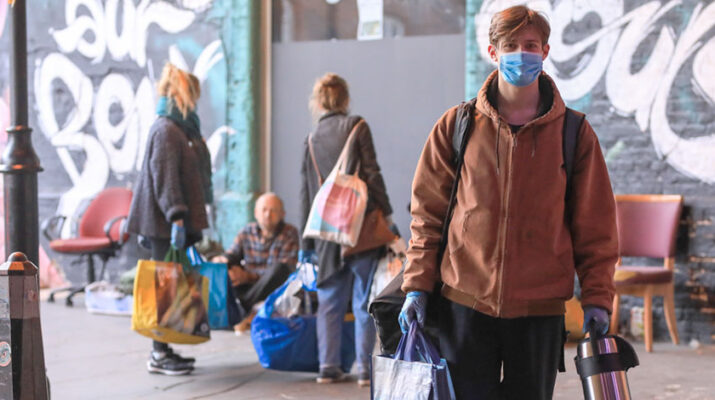 New York state was ranked first in the U.S. for having the largest homeless population, according to the U.S. Department of Housing and Urban Development’s 2019 Annual Homeless Assessment Report.

In 2019 New York State had a total homeless population of 92,091, according to the report. Of that total unhoused population, 49,978 reported to have families, compared to the 42,113 who reported being single. The number of unhoused people who in the state reported to be unsheltered—that is, sleeping on streets and parks and not in a homeless shelter—reached 4.4%, and 7.8% of the unhoused population have been legally homeless for a year or longer.

Steve Darman, chairman and founder of the Mohawk Valley Housing and Homeless Coalition, said he was neither shocked nor surprised by the staggering numbers. The state is home to a lot of big cities like Buffalo, Albany, Syracuse, Rochester, Utica, Rome and New York City.

Darman also said the Big Apple’s homeless population exceeds 60,000 people, which is the highest in the state. Plus it is becoming harder for people to buy or rent a home and manage their household finances, as the state’s real estate prices increased by double digits in 2020, according to Norada Real Estate Investments.

“The cost and availability of housing in New York City is off the charts,” Darman said. “Even people in the Bronx, Brooklyn and Queens cannot afford an apartment. You’re looking at $1,500 a month and they’re making $15 an hour. Just do the math on that. That doesn’t surprise me at all; but Upstate here has also seen an increase. That includes Syracuse, Rochester and Buffalo. It’s just hard to find housing. It’s hard to find one-bedroom, two-bedroom and three-bedroom (apartments) that just meet the basic affordability standard. Try to find a decent one-bedroom apartment for $600 a month. Finding it is one issue. Paying for it is another.”

In Mohawk Valley: Not Worse, But Not Better

Mohawk Valley’s homeless issue is, to Darman’s terms, not getting much worse. But, it is not getting much better, either. Darman and the rest of the members at MV Housing and Homeless Coalition spend a few days of the year walking around the streets and parks in Oneida and Madison County, counting the number homeless people that roam in these areas. The group’s 2019 one-day count, in just Oneida County, was 168. In 2018, it was 178. But, in the year count, the coalition found around 800-1,000 homeless people per year, according to Darman.

Darman said the Mohawk Valley had a much smaller population of unsheltered homeless, but in 2020, members of the coalition found and served 90 unsheltered homeless people in a four-month span. This, according to Darman, was a slight increase from previous years.

The Emmaus House, located on Kemble Street in Utica, provided temporary shelter to more than 12,000 homeless women and children, according to StMargaretsHouseNY.

Judith Reilly, an executive director at the Emmaus House and St. Margaret’s Ecumenical and Retreat Center in New Hartford, said the number of homeless women and children that slept at the Emmaus House slightly increased before 2020, but due to the pandemic, the house had to limit the sleeping capacity in each bedroom in order to keep their guest and staff healthy and free from the virus. The house served 77 women and 10 children in 2020, which according to Reilly was down from 2019.

Just like Darman, Reilly said the large number of homeless people in New York State did not shock her.

Homelessness, to Reilly’s perspective, is not only becoming an issue in the state, but in the Mohawk Valley as well.

“Homelessness is a serious issue throughout the country, and of course, right in our own community,” Reilly said. “New York State having the largest homeless population isn’t a surprise, but it does speak to the continued work that we as a community and society have to do.”

Some people might point to the coronavirus as the obvious reason that pushed many people out of their homes and into the streets during 2020. But, there are other things outside of the virus that led to this increase.

“Homelessness is often the result of other life situations,” Darman said. “People that struggle with mental health, disabilities, addictions and substance abuse. Those groups have always been there. It’s gotten a little bit worse, especially post-COVID.”

The MV Housing and Homeless Coalition’s mission, according to its website, mvhomeless.org, is to prevent and end homelessness in the Mohawk Valley. The coalition provides food and lodging to the homeless and just opened its own youth shelter. Darman said that a homeless shelter is not the best solution to end homelessness, as they only provide temporary housing and not long-term. The group’s main focus is to provide permanent housing to the homeless; to find the poor people their one true home.

Darman said he had a bunch of meetings with Utica’s mayor about the homeless issue. The two worked together to try to help the poor and reduce the spread.

Along with the group’s effort to decrease and help the homeless population, Darman is also urging the state of New York to construct new housing units as another good solution towards reducing the spread.