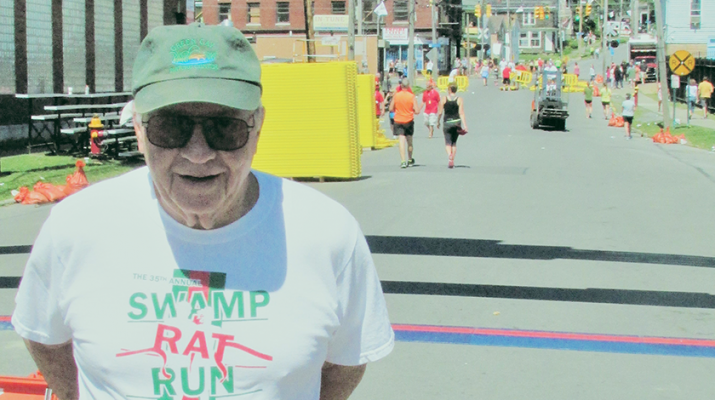 Sheldon Kall of Manlius didn’t take up running until he was in his 60s.

Two decades have passed since then and he knows he’s not getting any faster. It’s certainly challenging and rewarding, yet in an obscure way.

“I wish I was 18 again,” he quipped after completing the Boilermaker Road Race in– Utica in barely under three hours recently.
And there were barely any witnesses either.

Kall’s time of two hours, 40 minutes and 52 seconds actually missed the cutoff time for qualifying for the Boilermaker. Two and a half hours is the standard qualifying time to finish the 15-kilometer (9.3 mile) race and runners are advised of it when they sign up. They are not barred from competing, however.

When the clock at the finish line passes 2:30, workers begin tearing down the course and taking down the barricades and fences that separate the thousands of runners from thousands of spectators, who long ago found their way to the post-race party a block away at F.X. Matt Brewing Co.

Still, the timer was visible and the finish line intact for a little longer.

Although officials are naturally concerned about any stragglers who might still be out there at that time (and check on their condition), at his request, Kall is given the green light to finish under his own power. He has plenty of elbow room around him, which is not an option for everyone when you start out with 15,000 other runners.

Kall, wearing his trademark running outfit of red shorts, a T-shirt that read “Swamp Road Run,” a green visor and a white cap, was accompanied at the finish by his niece, Maureen Shaheen of Tupper Lake. She had also run the 15K and finished way ahead of him before going back up the hill on Court Street and joining him for the final stretch.

At 85, Kall was the oldest runner (part-time walker) in the field this year. He placed third in the men’s 80-99 age group, which consisted of just three runners. Another Syracuse-area participant, Sam Sammarco, 80, of Camillus, took top honors in the age division with a blazing time of 1:41.37.

“I’ve always been slow,” he commented in a phone interview prior to the Boilermaker. He has run the race at least 20 times, including 10 times with his wife, Mateele, who is 76 now, but she sat out this year.

New Hartford resident Rose Hosp, 75, ran the Boilermaker for the 36th time in 40 years and was third with a time of 2:29.23. She, too, was among the late finishers, but she was jubilant, raising his arms in triumph when she crossed the line and showing off her personalized T-shirt for a photographer.

Kall is always on the go. He is an attorney with the Kall and Reilly law firm in Syracuse. “I still work every day,” he said.

He graduated from Le Moyne College in Syracuse and later from Syracuse University Law School. He was not an athlete in his younger years, although he has been an avid tennis player.

He explained that he was late in picking up the sport. It came, after all things, because he began experiencing heart trouble when he was in his 60s.

“I had a couple of stents put in,” he said. “I didn’t have a heart attack, just blockage. The doctor told me to get lots of exercise. Before running, I played recreational tennis and racquetball for 50 years.”

He hasn’t shied away from running marathons and has three on his resume. His first one was in Rochester (Ontario Shores) when he turned 70. He recalled that he first got interested in the Boilermaker because his partner, Richard Reilly, used to lead a group from his office.

Kall’s nephew lives in Utica, too, and mans a cheering station with other family and local friends at the six-mile post.
“I’ve done a lot of races in Syracuse,” he added, including the Mountain Goat and a 10-miler in Cazenovia.

John DeTraglia, the Boilermaker’s medical director, and his staff had a relatively worry-free day for the 2017 run.

At the post-Boilermaker press conference, DeTraglia said his staff treated just 64 runners, 26 in the party area and 18 on the course, mostly for dehydration. Two people were transported to the hospital (the average is around five or six each year, but he said they recovered quickly.

Tim Reed, president of the Boilermaker Road Race for the last 10 years, waited until the day after the race to announce his surprise retirement.

Reed again is following in the footsteps of his elder brother, Earle, who started the Boilermaker in 1978 to celebrate the 100th anniversary of his family’s business, Utica Boilers (ECR International and now Utica Companies). Earle was president of the company. He later became president of the Boilermaker and oversaw its growth and development through its formative years.

“In spite of all the changes we have seen over the years, the Boilermaker has held true to Earle’s vision that its true purpose is to change people’s lives,” Tim wrote in his president’s welcome in the program book.

Tim succeeded his brother as president of Utica Companies and took over the Boilermaker, as well. Under Tim, the race evolved into a major event with activities that occur over a three-day weekend and involves the entire Mohawk Valley. He also helped expand the race’s popularity.

Earle is still a member of the corporate board of directors, Though Tim is stepping down, he told the media he now has opportunities and time to return to running the Boilermaker next year.