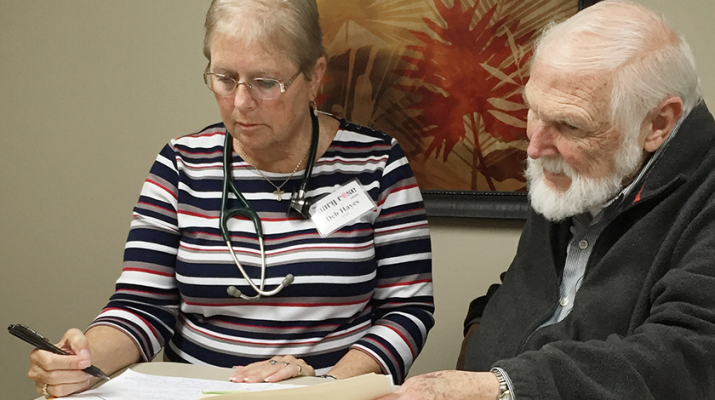 In the Oneida Valley, a somewhat rural area about halfway between Utica and Syracuse, a group of medical professionals is not waiting around to see what comes out of the ongoing national health care debate.

Well before the Affordable Health Care Act’s inception, let alone its overhaul and proposed replacement program, volunteers affiliated with the Gorman Foundation opened up the Mary Rose Clinic, Oneida Free Medical Health for the Uninsured and Underinsured, in the Northside Shopping Center in Oneida, Madison County.

As the name indicates, the clinic mainly serves people living in or near Madison County who are uninsured or underinsured. Services are completely free to those 16 years or older. The clinic is open two days a week — from 4-7 p.m. Wednesdays and from 10 a.m. to 2 p.m. Thursdays.

The entire staff, including doctors, nurses and clerical workers, is unpaid.

“We get patients coming from as far away as Boonville or Utica,” Zeller said. “We do get a lot of people.”

On a typical day, more than 18 patients will be treated.

George retired as a physician but continues to practice on a volunteer basis. The staff also includes nurse practitioners Sharon Jasek and Deborah Hayes, and physician assistant Kaitlyn Huysman.

Martyn proposed the clinic in 2009. She approached Amanda Larson, president of the Gorman Foundation, about volunteering her services. Martyn had previously opened a clinic in Sri Lanka after the 2004 tsunami. The Gorman Foundation was happy to help, providing facility space that was available in the shopping plaza.

For guidance, Martyn and Larson visited free medical clinics across the region and joined the National Association of Free and Charitable Clinics.

The Gorman Foundation is based in Oneida and was established in 2003. Its mission is to improve the quality of life for present and future generations, and serves as a living legacy to Owen and Alice Gorman.

Owen was a successful attorney and financial investor who lived and practiced in New York City. He vacationed in Saranac Lake. He was married to Catherine Cummings, of Waterville, until she died in 1977.

After she died, her younger sister Alice, also of Waterville, moved to New York City to work as his law clerk and later managed his vast wealth. They were married in 1997. He died in 1999 at the age of 93.

Alice died in 2002 of breast cancer. Naturally, the foundation has been generous toward cancer-related functions of Oneida Healthcare Center.
Grants are only awarded to nonprofit, tax-exempt organizations that are within the Gorman Foundation’s geographic focus and areas of interest.

The clinic is named after Mary Rose Durfee, the sister of Alice Gorman and the daughter of a hops farmer. Durfee ran a small diner in Oneida in the 1950s and 1960s. She worked about 14 hours a day and, even though she owned the business, she still didn’t make enough money for her own medical or dental care, according to the clinic’s website.

One of the purposes of the clinic is to help people like Durfee who are working their hardest to get by but still need a hand with medical care. Durfee lives in Sherrill, just outside of Oneida, and continues to support and promote Central New York’s hops history.

Patients with medical emergencies should not go to the clinic. Rather, they should call 911 or go to a hospital emergency room. Also, they do not write prescriptions or give prescription refills without a physical examination by one of the clinic doctors.

In addition, as a matter of policy, they do not treat patients who qualify for Medicaid or Medicare, but will allow a one-time exception in urgent situations.

Zeller said the underinsured, those who have some type of insurance plan but still can’t afford to pay for services, make up a significant chunk of the clinics patient load. The clinic also sees a fair number of patients from local Amish and Mennonite communities.

“We’re here to serve as long as we’re needed,” she said.

According to the National Association of Free and Charitable Clinics, there are about 1,200 facilities like the Mary Rose Clinic across the United States.

The Mary Rose clinic is listed on its website, along with Amaus Health Services in Syracuse and the Ithaca Free Clinic in Tompkins County. All told, the free clinics affiliated with the national organization report seeing about 1.7 million people annually for nearly 6 million patient visits. More than 160,000 volunteers are involved.