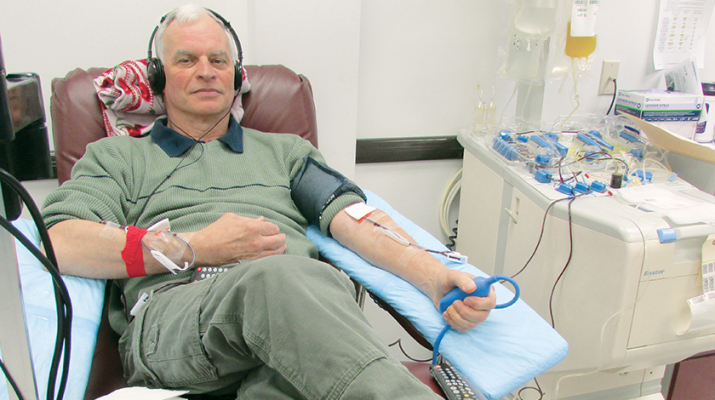 Donors provide life-saving blood to those in need in community

How difficult is it to save a life?

According to Tom O’Hara, Mike Brunet and his mother, Mary Brunet, and hundreds of other American Red Cross blood donors in the Mohawk Valley, mere minutes can make a big difference.

“It takes 117 to 137 minutes to give three units of blood,” said Mike, who returns home regularly to donate despite having an unusually busy work schedule out of town.

“Who can’t spare three hours a week if you can save a life?” asks Mary of New Hartford. Both she and her son are longtime blood donors, but Mary said she is more apt to cajole her friends to do their part.

The Brunets were among a select group of about 60 donors who were honored recently by the Mohawk Valley chapter of the American Red Cross for making 24 platelet donations — the maximum — within a 12-month period.

Mike, 48, said he started donating blood in 1987 and would give as often as six times a year. He learned his blood type — A positive — was rare and desperately needed. After 10 years of that, Red Cross officials asked him to consider donating platelets, which is a more complicated process, yet just as painless and safe as giving whole blood.

“I come in on my day off,” Mike said. “A donation takes me about two hours and 10 minutes. I would give more than 24 times a year if they would let me, but they can’t.”

As a nurse, Mary frequently witnessed the value of blood donations. It wasn’t until she went to work in a Utica nursing home, she explained, that she began to understand how she could personally make a difference in saving the life of a co-worker.

“A girl who worked in human resources was getting three blood transfusions a day because of the effects of chemotherapy,” she said.

She encourages her friends to donate. “I tell them, ‘You can do this, too.’ What’s three hours if you can save a life? My son recruited me for platelets and now I’ve been doing it seven years,” she said.

Donors don’t necessarily know who will benefit from their whole blood or platelets, but they still feel richly rewarded.

“Every time I donate, I get an email from the Red Cross telling me about a ‘story of hope,’” Mike added. “It shows me where the plasma blood or platelets has extended someone’s life.”

Sometimes the need is right in his back yard. “We give enough to meet our quota and keep the Utica hospitals supplied,” said Heidi Chrisman, site supervisor at the local Red Cross office on Commercial Drive in New Hartford.

People who are familiar with blood donations know it is ordinarily a 10-minute procedure. Although giving whole blood plasma is quick, donors have to wait a minimum of 56 days before they can donate again. That puts the blood supply in jeopardy, especially if there is a widespread emergency.

Donations of whole blood are typically used for trauma patients or accident victims where there is an extreme loss of blood.

Platelets, though, are routinely used to support patients recovering from or preparing for surgery and aids in blood clotting. Platelets help cancer patients, organ transplant recipients and those suffering from blood disorders, according to the Red Cross.

“It takes five to eight (whole) blood donors to equal enough platelets given by one donor,” said Tom O’Hara of Clinton, who returned to the Red Cross office to donate platelets early on a Sunday morning, a few days after the recognition ceremony.

He has been a blood donor for many decades. He started while he was in high school for his mother, who suffered from blood cancer, he said. He now hopes he can help a friend of his who has cancer and is hospitalized.

When giving platelets, both of the donor’s arms are hooked up to an apheresis machine, which is used for the collection of donor blood components. The donor reclines in a chair and can watch TV, videos or listen to music.

A smaller needle is used for a platelet donation compared to a traditional whole blood donation, so some donors find it to be more comfortable. A centrifuge pulls blood out of one arm and separates the platelets from the plasma. The remaining red blood cells are then returned to the other arm.

One platelet donation through apheresis removes less than 20 percent — about 2-½ tablespoons’ worth — of a donor’s total platelets.

Platelets only last five days, so the Red Cross depends on regular donations to “ensure a safe and steady platelet supply,” it states.

Every 30 seconds, someone in the United States needs platelets.

Platelets are in constant demand by hospitals.

After your platelet donation, they are immediately tested and prepared for delivery to a hospital. On average, platelets are transfused within three days of donation.

Over 1 million platelet transfusions are given to patients in need each year.