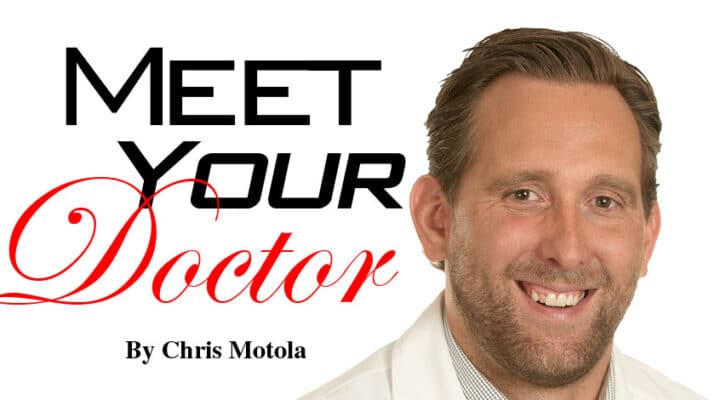 Q: What kinds of joint replacements do you perform at Syracuse Orthopedic Specialists?

A: Routinely, I’m doing hip and knee replacements. Traditionally, 20 to 25 years ago these procedures were mostly done on elderly, individuals over 65. And obviously we continue to do those, but as people have become more active throughout their lives, we’re starting to do them on patients who are much younger who have significant disease in their hips and knees. In a knee replacement we’re basically replacing the ends of the bones. You sort of develop arthritis on the ends of your bones. We trim off the ends of the bones and replace them with metal caps that are cemented into place. The reason we perform these procedures are pretty much so we can get back to the activities of daily living and do it pain free. A lot of these patients have severe pain, discomfort, disability, trouble doing even basic things around the house. Our goal is to restore function, eliminate pain, and get them back to doing the things they like to do.

Q: You mentioned seeing a lot more young patients. What’s that usually from?

A: So obviously there’s always the risk of individuals developing post-traumatic arthritis as the result of an accident or injury, which can happen at a much earlier age. There are other issues like inflammatory arthropathies, some diseases in the hip like avascular necrosis of the hip. Essentially the blood flow to the ball joint of the hip jointed is blocked and the head of the ball essentially dies of necrosis. So we see some patients in their 40s come in who develop it for reasons we don’t fully understand. So the predictable operation there is typically to replace their hip.

Q: A lot of these procedures are done minimally invasively now. How complex a joint replacement can be done that way now?

A: I think the words “minimally invasive” are in the eye of the beholder. There are people who will say it, others who will practice it. What I tell patients about surgery and the size of the incision, I say I’ll do the smallest incision possible to do the surgery effectively. Obviously the more complex the pathology, the less likely minimally invasive comes into it. You need to be able to see more to perform it effectively. So I would say the word “minimally invasive” and “complexity” within the total joint world doesn’t really exist.

Q: What’s the longevity of joint replacements now, and have you ever had to replace the same joint twice on the same patient?

A: Yes. So, the number 100%, in my opinion, does not exist in the surgery world. There’s always a risk of things happening inter operatively, after surgery, years after. Some of the things that may occur may require revision surgery. Some prostheses placed in the mid-’90s may be wearing out. At that point, depending on how functional the patient is, what their goals are, revising the implants that are already in there becomes an option. But the possibility of operating on the same joint more than once always exists. If you’re replacing a young male or female’s hip in their 40s, even if they get 20 years out of it, they’ll only be in their 60s. Obviously, the younger patients are when they get something done, the more likely it is that they’ll need a revision at some point.

Q: When you say “revision surgery,” what are we talking about?

A: It’s a broad term. So that could mean, in a knee replacement for example, that the metal on the femur and tibia are fine, but the piece of plastic between them has worn down and needs to be swapped out. Other times you may need to take everything completely out and put all new stuff back in. You treat it accordingly.

Q: You were a quarterback in college. Do you think that gave you more of an appreciation for orthopedics?

A: Yeah. I think within all the subspecialties of medicine, a lot of former college athletes find their way into orthopedics. As kids, teenagers, college athletes, you tend to develop relationships with orthopedic specialists. So, then, if you end up going into medicine, you lean on life experiences and relationships. I also think it’s second to none in terms of your ability to see a problem, fix it and then watch the patient recover over the course of weeks or month.

Q: What kinds of interventions do you perform prior to replacements?

A: Most of our practice is non operative. Patients are usually sent to physical therapy, and we try to see if physical therapy, along with anti-inflammatories, can alleviate, improve or even strengthen someone’s status. For the patients who haven’t improved, the next rung on the ladder would be some kind of injection therapy. In the knee sometimes we use gel injections. Some people, for the rest of their lives, get by with just injections every few months or years. And then when all that fails, the pain’s terrible, life is bad, we talk about surgery. All of these procedures are completely elective.