Satan himself is indeed among us and weaving a deceptive web 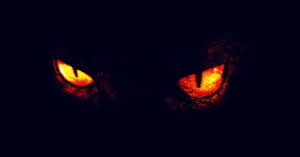 (Editor’s note: This is a three-part series discussing the existence of the spirit realm. This month’s segment features our unseen enemies, while the third and final segment next month will focus on our unseen allies.)

She came prancing up the basement stairs and flung the door open, riding a cloud of fumes into the living room, hands ominously stained. When my mother went down to switch out laundry, she screamed. I ran down, and saw it — the walls, the washing machine, even the dirty laundry was dripping with noxious red liquid.

When my mom confronted my little sister, she passionately declared her innocence, throwing herself onto the floor and sprawling out in feigned agony against the woefully unjust accusation.

The kid was literally caught red-handed. And while as a teenager, I thought it was hilarious, looking back, I can see two glaring object lessons.

First, when a person is committed to a lie, there is no convincing them to break away from it. And second, lying is easy, but deception is far more difficult.

Lying usually makes people to lose respect for us, and swings a wrecking ball at our relationships. But an unconvincing lie is far less dangerous than a deception. Deception requires a level of intention, planning, skill and commitment.

While a liar may tell a lie, a deceiver can convince you of it.

Satan is referred to in the Bible as a liar, the father of lies (John 8:44) and the deceiver of the whole world (Revelations 12). Satan is someone we don’t hear much about these days; even while die-hard Christians will give sincere nods toward the supernatural superstars of the faith — the Father, Son, and the Holy Spirit — we tend to overlook the ancient enemy of our souls.

It’s been said that the greatest deception Satan ever achieved was to convince the world that he doesn’t exist. Yet the Bible tells us that we are engaged in a spiritual battle with “powers and principalities of spiritual darkness” (Ephesians 6:12).

If we truly are at war, how would it benefit our adversary to convince us that he doesn’t exist?

Simple, really: If Satan isn’t real, then it stands to reason that hell isn’t either. And if there isn’t a hell, then what’s there to worry about? He eliminates our sense of urgency by convincing us that there is either nothing at the end of life, or at least, nothing bad.

People don’t fight when they think there’s nothing to fight for.

It’s quite brilliant, tactically. If Satan were to make himself known, some would shrink back, but many would rise to fight — to join the ranks of the Lord as heroes of justice and valor, battling the greatest evil in history. This is the most persistent, deep-seated desire of the human heart.

But if Satan remains invisible and silent, eventually, he will be forgotten. Even better, the only voice that declares its existence — the texts of ancient scripture, penned by servants of his greatest enemy — will go uncorroborated, and mocked as folklore.

Eventually, people come to believe that there is no spiritual realm; and finally, that they themselves are not the possessors of an eternal soul.

How easy it would be, then, to take spiritual captives without a murmur of protest.

In the days of Jesus, Satan operated in a time and region of great spiritual awareness. As such, his attacks were overt, and often quite frightening.

But today, Satan is fighting a cold war — underground, and shrouded in two different but related veils: naturalism and new-age spiritualism.

Naturalism is the belief that the conscious mind is a manifestation of electrical impulses within an unfortunately conscious ape (that’s us), making desperate efforts to define himself by creating the illusions of love, purpose and a higher power.

Using science as a weapon instead of a tool, naturalism convinces people that because a process can be explained, it must be too simple to be special. It gives us permission to ignore the aching need for meaning, brushing it off as a byproduct of conditioned responses. It beckons to our flesh, spreading out before us a veritable feast of sensory experiences and endless outlets for entertainment in order to confuse our thinking, satiate our appetite for truth, and dull our ears to the whispers of Christ.

If, however, the “extra-smart accident” sales pitch fails, then spiritualism is the next line of attack: This can be a multitude of deceptions, but typically encourages a person to believe that any spiritual experience is a positive one. This is by far the most pervasive deception in the modern era.

The pied piper of spiritualism plays a seductive tune whose lyrics assure that God truly desires only one thing — for you to be personally fulfilled. And this is a role that Satan — who disguises himself as an angel of light (2 Corinthians 11:14) — is all too willing to play. He shrouds himself in a warm, welcoming glow, speaking soft words of personal affirmation, convincing his listeners that his leading is that of God himself. He persuades them to believe that they are perfect just the way they are. It’s a lullaby meant to sooth the spiritualist into a false sense of security, sleeping peacefully in a warm room, unaware it is being consumed by a raging fire.

Satan’s main objective is to intercept the relationship between God and man. The Bible describes him as a “roaring lion, walking about, seeking whom he may devour” (1 Peter 5:8). Ultimately, the victory of this war belongs to the Lord; but where will you stand?

Will it be in chains as an unwitting prisoner of war in the enemy camp, or in victory as a co-heir with the commander of the heavenly host?