Can Christianity provide thread of hope? 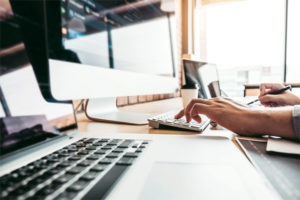 The well-dressed, smooth-talking Information Age rapped on our doors at the sunset of the 21st century, and charmed his way into our affections.

Curiosity propelled us to his side, and he dazzled us with his rapidly deepening pool of fact and fiction. His conversation was thrilling. We were captivated by his eclectic array of personalities. Pretty soon, we were committed.

Silent vows were exchanged, and we unwittingly married the Internet.

Turns out, our spouse is a textbook narcissist. But he’s got us convinced that we can’t live without him; we’re unnervingly codependent, abandoning all hope of healthy boundaries.

And even though he’s a hustler and a pathological liar, we just can’t seem to say goodbye.

Welcome to the new age, where the sea of information drowns everyone who dives in, and the waters are too murky to see clearly.

Streams of full-color panoramas of this broken world are ever before our eyes, reminding us that we are hopelessly at the mercy of unpredictable, unalterable catastrophe. Add to that a host of very wealthy sponsors that can persuade media outlets either directly, or indirectly, to report events with their preferred level of urgency, and it only takes a few hours to send the world into a tailspin.

This is an era that requires a discerning eye, and a calm hand.

“Watch out that you are not deceived. For many will come in my (Jesus’) name claiming, ‘I am he,’ and, ‘The time is near.’ Do not follow them.  When you hear of wars and uprisings, do not be frightened. These things must happen first, but the end will not come right away.”

Then he said to them: “Nation will rise against nation, and kingdom against kingdom. There will be great earthquakes, famines and pestilences in various places, and fearful events and great signs from heaven” (Luke 21:8-11).

This was part of Jesus’ response to the question posed by his disciples: “What are the signs that the beginning of the end is near?” The time frame they’re referring to was commonly known to the Jews as the “last days,” the final epoch which signaled the return of the Lord was imminent.

At this point, it’s important for us to understand why the Bible is a decidedly unique historical relic. The 66 books contained in the canonized scriptures are a collection of ancient texts written over the course of many centuries, the oldest of which were initially preserved carefully by Jewish scribes who took great pains to record each copy with flawless precision, believing them to be the very words of God.

Later, after the ministry of Jesus, eyewitnesses to his life, death and even his resurrection penned independent accounts within a generation of his death, validated by several hundred original documents discovered over the last two millennia. It’s not just a book of comforting platitudes to the weak-minded romantic — it’s an epic history, laden with mind-numbing genealogies, and predictions of future world events. Many of them are eerily specific, and have already come to pass.

While technological advancements continue to find ways to keep us distracted, alive and entertained, few people would argue that the world is only going to get better from here. Theists and humanists alike can’t ignore the evidence of entropy, the inevitability of war, greed and selfish ambition, and we all feel a strange sense that we are careening toward some epic grand finale.

Hollywood has capitalized on that apocalyptic bankroll with a decade of zombie pandemic cinema, and with every creeping terrorist cell that emerges and every annual viral pandemic that threatens to wipe out the world with a flesh-eating bacteria or super flu, we feel the groaning of the earth.

And every election year, we look for a savior on the ballot.

The human narrative is unnervingly predictable. It’s as if we understand innately that this is all winding to a close, and that our only hope lies outside of ourselves.

The bad news is, we tend to look at our stock portfolio, our medical personnel, or our elected officials to save us from whatever new and terrible future is cresting the horizon. But no matter which world catastrophe is smacked down, the next one is popping up in another corner at increasing speed.

The good news is there is hope on the other side of this broken world.

We all know it. We all have a looming, unrelenting sense that there is some solution to this injustice, some ultimate relief from all of this pain. In order to find the truth, we have to be willing to release our grip on the things of this world which are rapidly passing away, and ask ourselves the question: Could the universal human awareness that the world isn’t as it should be, and the universal desire for a hero to right these wrongs, be an echo of a story that was written in eternity? Could Jesus Christ really be the one we’ve all been waiting for?

“Then I saw a new heaven and a new earth, for the first heaven and the first earth had passed away, and the sea was no more.  And I saw the holy city, New Jerusalem, coming down out of heaven from God, prepared as a bride adorned for her husband. And I heard a loud voice from the throne saying, “Behold, the dwelling place of God is with man. He will dwell with them, and they will be his people, and God himself will be with them as their God.  He will wipe away every tear from their eyes, and death shall be no more, neither shall there be mourning, nor crying, nor pain anymore, for the former things have passed away” (Revelations 21:1-4).