It takes more than humans to stop pandemic 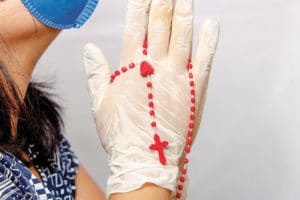 “I lift my eyes up to the hills; where does my help come from? My help comes from the Lord, maker of heaven and earth.” (Psalm 121:1)

Every believable lie is encapsulated in a little truth. When Cuomo asserted that human behavior has slowed down the spread of COVID-19, he made an inarguable observation; washing your hands and staying at home keeps disease from spreading.

And just like the billions of dollars of pork spending for the arts, the Internal Revenue Service, and the Kennedy Space Center that were shoved into the emergency COVID stimulus package, Cuomo has wedged a whole lot of foolishness into an otherwise acceptable statement.

How are we to answer this? Should we chastise and disrespect the governor? Should we run him out of office? Should we make excuses for his speech on the basis of the merits of his executive response?

In 589 B.C., King Nebuchadnezzar raided the city of Jerusalem, killing the king, destroying Solomon’s temple, and kidnapping strong youths of noble birth to serve in the Babylonian court. The boys were offered the choicest royal wine and food during their training, but a young boy named Daniel begged the chief officer permission to refuse, desiring to keep himself undefiled by what the Jews considered to be ceremoniously unclean foods.

He struck a bargain — if the Lord sustained he and his friends for 10 days on just vegetables and water, they would be permitted to eat only what their consciences allowed.

God strengthened the boys beyond their gourmand contemporaries, allowing them indefinite freedom to abstain — but don’t miss an important detail. Daniel did not impudently refuse to eat the king’s food; he made a respectful appeal. Daniel’s humble conduct, and God’s sustaining hand, won his freedom.

Daniel eventually found enormous favor with the king through his dutiful service and ability to interpret dreams, and the king relied heavily upon Daniel as a ruler of the province of Babylon. One evening, Daniel was summoned to the king’s courts to decipher the king’s most unnerving dream yet — a warning to Nebuchadnezzar that his arrogant, self-congratulatory attitude concerning the successes of Babylon would bring swift judgment from the Lord if he did not repent.

Daniel didn’t relish delivering this warning of judgment to the king; rather, he mourned over it and wished it were a judgment against his enemies instead! Daniel was well aware of the king’s arrogance and idolatry; but he desired the king’s repentance to the Lord above all things, entreating him to “renounce your sins by doing what is right, and your wickedness by being kind to the oppressed. It may be that then your prosperity will continue.” (Daniel 4:27)

In the end, Nebuchadnezzar maintained his position that he alone was the author and perfecter of the glorious city of Babylon, declaring, “Is not this the great Babylon I have built as the royal residence, by my mighty power and for the glory of my majesty?“ No sooner had the words escaped his lips than the forewarned judgment fell swiftly upon him.

However, to the shock of many and the delight of Daniel, King Nebuchadnezzar recognized his error and turned in rapid and complete repentance to God, crediting him for his mighty hand and gracious restoration, marveling that he is “able to humble the proud.”

Nebuchadnezzar lived his remaining days in the fear of the Lord, enjoying even greater prominence and honor than before.

Cuomo congratulates himself on his policies, believing them to be the catalyst of the salvation of New York. However, he fails to recognize that ultimately, we are under the sovereign hand of the Lord who is able to lengthen a pandemic for years, or eradicate it in a matter of days.

Likewise, we must not fail to recognize that the Lord places whom he wills into the seats of the executive branch, and he has his own purposes for bringing men to power.

Who knows, but that there may be a Daniel in Cuomo’s board of advisers, serving with integrity and praying with fervor for the governor’s repentance?

Who knows, but that the Lord may allow some season of significant hardship in the lives of such public officials, as a mercy to their souls, that they might turn and glorify him once more?

I’ve lifted my eyes to our state and federal governments and my help has not come from there. I’ve found little more than a faulty IRS stimulus website, four weeks of ignored unemployment claims, and no end in sight — but the Lord has graciously sustained us in surprising ways, and so we find ourselves (now, as always) well cared for by our heavenly father.