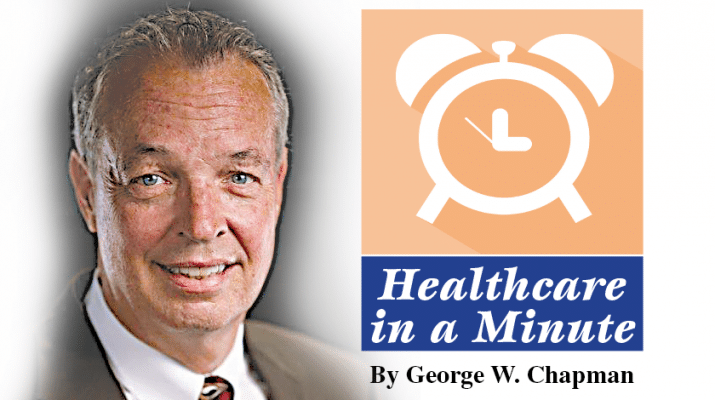 Columnist Healthcare in a Minute
August 1, 2019
Posted By: admin

It’s coming to your local hospital sooner than you think. According to industry experts, up to 45% of operating rooms will have AI in just three years. Robotic assisted surgery devices (RASDs) are already used by surgeons to provide faster and more precise treatments which reduce recovery times and improve outcomes. Experts predict the RASDs market will increase to $7 billion by 2022. Currently, operating rooms account for 60% of hospital revenues. By integrating with advanced home care devices, sophisticated urban hospitals can expand the range of their surgical expertise into rural areas. The goal of AI is to interpret, synchronize and coordinate data to achieve optimal OR results and patient outcomes. The proliferation of artificial intelligence in healthcare will help mitigate the projected shortage of physicians by increasing the efficiency.

Wearable devices are a form of AI. According to several surveys, about two thirds of consumers responded they would be willing to use a wearable device, like an Apple Watch or a Fitbit, if it means fewer trips to their provider’s office. Fifty-five percent of respondents said they would wear a device at home if it meant their health could be monitored by someone remotely. Many insurers are offering discounts to members with wearable devices. According to a study by Evidation Health, diabetic and hypertensive patients with wearable devices are far more compliant with adhering to their meds. The biggest challenge is engaging patients to adopt and integrate virtual care into their daily lives. Despite all the advances in medicine, it still takes two to tangle. Poor patient compliance still frustrates physicians.

Insurance companies fare better when claims decrease. No longer remaining passive, insurers are more actively involved with their members to improve their health (and of course lower claims). To learn more about their membership and to develop strategies that help members stay healthy, insurance giant United Healthcare surveyed their Advantage members. Not surprisingly, 70% of respondents said health was their No. 1 concern. Eighty-six percent said they were worried about falling ill or becoming hospitalized in the near future. When asked what would you do to live healthier, 70% said they would start a new routine like a better diet, more exercise or volunteering. Forty percent of United’s Medicare Advantage members have multiple chronic conditions and 40% of their members live alone. Ten thousand people a day turn 65.

Dwight Eisenhower warned us against the “acquisition of unwarranted influence, whether sought or unsought, by the military-industrial complex.” Arms manufacturers were hiring retired generals to act as lobbyists to their former employer. Now the same can be said of the FDA-pharmaceutical complex. Former FDA commissioner Scott Gottleib resigned in early April “to spend more time with his family.” Less than three months later, he is working for drug giant Pfizer. This has become standard fare in Washington and is just another example of why President Trump wants to require or mandate a two-year waiting period between working in government and becoming a lobbyist for the very industry you were regulating. The US has the highest cost of healthcare per capita in the industrialized world and the pharmaceutical industry plays a huge part in our costs. Drugs invented, tested and manufactured in the US are sold abroad far cheaper. President Trump wants to establish what’s called a “favored nation” policy whereby the US takes advantage of the lowest world-wide price charged for a drug sold outside the US by a US manufacturer. So far, there has been a lot of talk but no action.

It’s a tough place to work and it’s where the worst cases present themselves. Emergency departments are a classic metaphor for high reward coupled with high risk. Boston-based Coverys, a professional liability insurance company, analyzed over 1,300 claims against EDs from 2014 thru 2018. Cardiac and cardiovascular conditions, (like heart attacks, aortic aneurisms and ruptures), triggered the most liability claims. More than half the cases filed against EDs were due to: the failure or delay to make a diagnosis; lack of an appropriate family history and physical; and inappropriate ordering of diagnostic tests. (Similarly, diagnostic errors are the leading cause for claims against primary care providers.) A boon to emergency departments is the increased availability of and access to crucial patient information via the electronic medical record, especially when the patient presents to the ED unconscious and/or alone.

According to a study published in JAMA Oncology, in addition to the cost of treatment, premature deaths caused by cancer account for over $94 billion in lost earnings annually. Lung cancer caused the most lost wages at $21 billion. It caused 23% of all premature cancer-related deaths. Utah had the lowest amount of lost wages at approximately $20 million, while Kentucky had the most lost wages of any state at $35 million. Researchers suggest states use the data to guide future policy decisions that address risk factors like smoking, obesity and lack of exercise. For example, did states that adopted Medicaid expansion fare better than states that did not when it comes to cancer prevention and premature deaths?