Notre Dame and future of the church 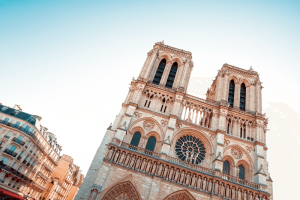 When a 900-year-old symbol of Christianity is engulfed in flames on the first day of the Holy Week, one cannot help but take notice.

It’s human nature to look for a supernatural explanation. Some might see God’s anger burning against an organization which claims to represent his holy will, yet has succumbed to sexual immorality, greed, sensuality and commercialism. And perhaps others might see his desire to burn off the dross, and purify his people once again.

Let’s pause a moment to genuflect in the cinders of Notre Dame and ask ourselves, as the ancient cathedrals crumble, what is the future of the church in an increasingly secular Western world?

It isn’t a new question. While each generation may face new challenges as culture flows from one rapidly increasing technological innovation to the next, the church has always followed the cyclical pattern of grow, praise, forget, repent, repeat.

And so, while the destruction of a building that housed centuries of worshippers may seem tragic, nothing of the church was really lost. The church, after all, is not a building, but a people.

The brilliant paradox of the church is that in order to grow, it must die. And to move forward, it must turn back. Christ may yet dip his finger into the ashes of Notre Dame and mark the foreheads of a whole new generation of believers with the sign of the cross.

The church is the most powerful, influential entity in the world when it operates according to the will of God. But when it loosens its grip on the tenets of Holy Scripture to pick up the values of the world, the church begins to operate autonomously of the one that Jesus died for and his apostles lived for.

And at these pivotal moments, God raises up individuals to remind both the believers and the skeptical outsiders what his definition of “church” truly is.

Immediately following the resurrection and ascension of Christ around 32 AD, a small group of believers prayed together in a stuffy upper room during the Jewish festival of Pentecost, and the church was born. These early Christians were fervent in prayer, bold in their proclamation of Jesus as Lord, powerful in their witness to his power, and earnest in their love for one another. The authenticity of their fellowship drew thousands to faith in the newly crucified and resurrected Son of God. Jealous and fearful of their influence, the political and religious leaders of the day initiated the first wave of persecution. As the Apostles and other believers were driven from the central location of Jerusalem, they took the Gospel with them, effectively growing the church all over Europe and Asia.

Fast forward to the 4th century. Emperor Constantine claims a vision of victory in battle by the cross of Christ, believing he was chosen by God to deliver the gospel to the civilized world. In 313 AD, Christianity was legalized, and by 380 AD it became the official religion of the Roman Empire. As Rome popularized and politicized Christianity, the church became “The Holy Roman Church.”

Now a powerful political entity, the church attracted not only fervent believers, but also power-hungry charlatans, opportunists, and outright thieves. Inevitably, men would rise to challenge the edicts of the wayward political institution, calling believers back to true faith in Christ.

English theologian John Wycliff of the 14th century rebuked the church for valuing empty human tradition over Scripture, challenging members to renew their love for the word of God.

Czech theologian John Huss followed in Wycliff’s footsteps, rejecting the pope as the church’s authority, crying out against the reckless opulence and materialism of the clergy, and insisting that each man had a right to a Bible in his own language.

By 1517, the stage was set for Martin Luther, a seminal figure in the Protestant Reformation, to bring formal charges against the church by nailing his 95 theses on the door of the cathedral at Whittenburg, Germany. His major qualm with the papacy was its adherence to extra-biblical mandates (like buying your way out of a fictional purgatory with indulgences), and teaching whatever they felt was advantageous to the maintenance of power, influence and cash flow. And, of course, about 93 other things. Luther, who desired reform, instead forged the largest church split in history in an effort to call the church back to the Bible.

Again and again, God recalibrates the mission of his people. The monks reminded us of a need to live lives of holiness and prayer. The Puritans fled persecution born of their desire to serve God as the Bible instructs, and forged the spread of the Gospel in North America. The Anabaptists called the church back to evangelism; the Jesus movement of the ‘70s reminded the church of the presence of the Holy Spirit.

When people grab a hold of the church and steer it according to human convention, it’s like a toddler with a Rubik’s cube. Twist and turn though they might, all they can manage is a disordered jumble. But in the hands of God, the church begins to makes sense. It isn’t a political entity, a social club, or a house of religious entertainment; but a people of prayer, devoted to Scripture, receiving communion, loving one another, and seeking their neighbor’s good.

Today, the stage is set for another major adjustment — not a reinvention, but a rediscovery. Contrary to the ways of the world, in God’s economy, there is no moving forward until we take a step back.

Within hours of quenching the flames, France already had plans in place to restore a smoldering Notre Dame to its former glory.

Not to build a new cathedral, but to make it look like it once had.

Out of the ashes of Notre Dame, the church of Jesus will certainly continue to rise. While men may erect temples, it is Jesus who builds the church.